The next morning was Sunday, and for the majority of Italians, that means going to mass. We had the option of going both this Sunday and the next Sunday, so I decided to go on this day.

We went to mass in Narni at the St. Juvenal church. It was absolutely gorgeous inside, and we got to visit it again when we toured Narni a few days later (that will be in my next post!). Going to mass in Italy was a pretty cool experience, even though I couldn’t understand much of what they were saying!

After mass, we stumbled upon an outdoor art market that was going on in the square. There were a bunch of vendors selling jewelry and other random, homemade items.

This was the main area where the artists sold their work. 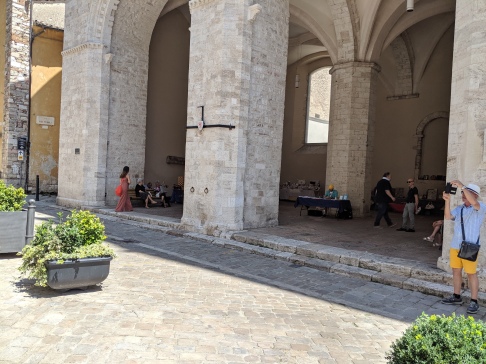 I bought a little recycled bowl for my mom at this woman’s booth. She had so many pretty pieces of jewelry, and much of it was made from recycled plastic. Also, can we just take a moment to appreciate the man’s outfit who’s standing on the left?! Ugh, I love it.

Here’s some of the lovely jewelry for sale.

And this is, perhaps, the most charming moped in all of Italy! 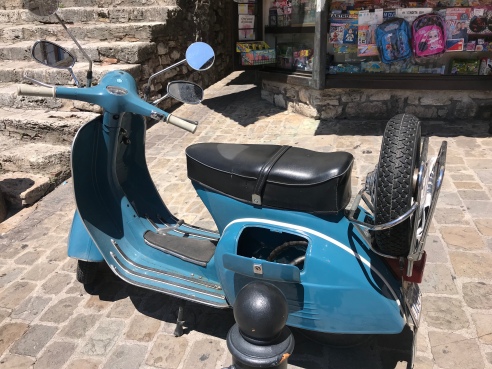 This is a flyer for the annual Gnocchi Festival in Narni. When I applied for this scholarship, I had to make a video researching an aspect of the town, and my topic was this festival! I used this flyer in my presentation, so it was really neat to see it in person.

After mass, we got to go swimming at a nearby pool which was a nice treat. We swam for a few hours, enduring the pain of the swim cap and trying not to get sunburnt.

The next thing that was on our schedule was “Narni Adventure.” None of us had any idea what that meant, but we soon learned that it was an underground obstacle course. In the town square, there’s a subway entrance-looking staircase that goes underground. Once you make it down the stairs, there are harnesses and hard hats hanging on the wall.

We watched the safety demonstration and were allowed to begin going through the course. I’m not the most coordinated person, so this was a bit of a challenge. Once we got to the end, there’s a zipline you take to the opposite end of the room. After that, you walk back to the other side and can rock climb up a wall. It was my first time rock climbing, but I made it to the top and rang the bell, whoooo!

Despite the stress that this induced, it was pretty fun. Narni Adventure is pretty new, and the employees working were super friendly. If you ever find yourself in Narni, go check it out!

After that, we walked a couple feet to the nearest gelateria. This cone was probably the best one I had. These flavors are so simple, pistachio and strawberry, but I remember it being the most refreshing afternoon treat.

We walked by this purple house nearly every day on our way to the hostel.

After gelato, we headed back to the hostel to shower and eat dinner. Dinner was made by our two teachers, and it was buonissima! There was homemade pesto with pasta, zucchini, spinach, and fresh fruit for dessert. I still dream about this meal.

Later that night we went out into town again to eat more gelato and hang out. There was a man with a karaoke machine, singing old Italian songs. My friends and I danced in the street next to him, probably looking crazy but having so much fun. After we stopped dancing, the people sitting outside at the surrounding restaurants gave us a round of applause. It was a pretty magical night and one of my favorite memories.

I love this photo of the fountain that stood within the piazza. I threw multiple euros in there with my friends over the course of the trip.

After hanging out in the town, we headed back to the hostel and went to sleep.

The next morning, we had breakfast and then a three-hour lesson from 9-12. After the lesson, we had lunch in town and hopped on a bus to Carsulae, an excavation site. I don’t have many photos, but — despite the unbearable heat — it was pretty cool to see people working on the excavations right in front of us.

After that, we headed back to Narni for dinner. This picture is taken in the center of town. 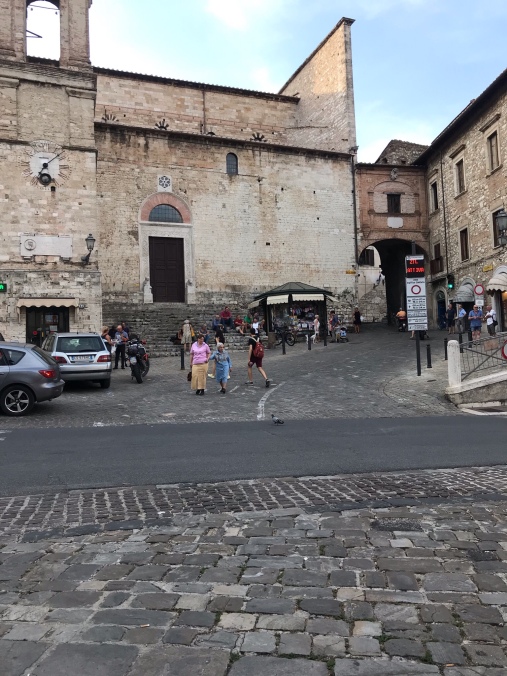 Yup, you guessed it: another gelato! The darker-colored one is coffee, and the white one is yogurt. My friend Jane tried yogurt and said it was good, so I was intrigued and tried some for myself. I really liked it, but it was a bit weird to have with coffee, haha.

Another cute piece of graffiti.

One of the things that made this trip so much fun was the fact that we were all overtired for much of it. We’d stay up late and then wake up early, so by the end of the day many of us would either be dead or get a random burst of energy. Also, the most random things were funny to us, such as this weird bumper sticker we saw on a Fiat. 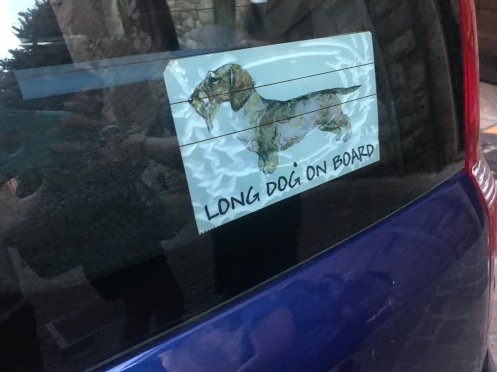 And here’s yet another beautiful sunset to end the day. This is the view from my room at the hostel. 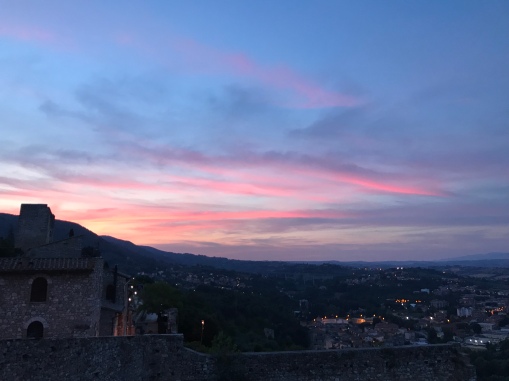 I have a lot of photos from the church we had mass in, so I’ll share those in my next post, along with pictures from the mosaic class we took (and more gelato photos, I’m sure!). Ciao!