I’m finally ready to share about my trip to Sicily! My post-trip sadness is (mostly) all gone, so I’ll be telling you all about it in my next few blog posts! (10 days is too long for one giant blog post, so this one will just be the first day.)

I went on the trip with my school, and my grandpa joined me. While we were in Sicily, my aunt and uncle, who live in London and are only a few hours flight from Italy, came down and spent the week with us, too. Not only was the trip an amazing cultural experience I will never ever forget, but it was also awesome to spend time with my family and make new friends. I’ll say more on this later, but I could not have asked for a better first trip abroad. I am so grateful I got to go. Here’s to many more! But for now…andiamo a Sicilia!

We left from Boston on April 13 and headed to Germany, which was an eight-hour flight. We flew on Lufthansa, a German airline, and I had my first ever dinner on a plane. I’ve been on plenty of planes but had never been served a full course meal. That was certainly an… experience!

From Germany, the flight was two hours to Palermo. We had been flying all night, so when we got to Palermo it was 10 or 11 in the morning, meaning we had a full (relaxing) day ahead of us.

This is the view from the plane as we got close to Palermo. Look at those clouds!

Once we got to the airport, we met up with our wonderful tour guide, Nicole. She was with us the whole trip and was the absolute best. By the time we left, everyone was so sad to say goodbye. 😦

We began to drive to our first hotel, Hotel Sirinetta. While on our tour bus, we each had mini heart attacks while witnessing the narrow roads and very wild drivers of Sicily! I’ll share more on that later. The hotel was in a small town called Isola Delle Femmine, which was a very strange area of Sicily. There wasn’t much to do, and there were not many people out during the day or night. However, we were in this hotel for the longest amount of time, and I grew to like the area.

My roommate and I definitely got the best view! We couldn’t figure out how to open the screen door to go onto the balcony, but once we did, we got SO excited about it. Every day I stepped outside and couldn’t believe how beautiful it was. God, I miss it so so much!

Cute (and uncomfortable) chairs on the balcony.

After we got to the hotel, we all felt gross from the long travel day. We relaxed and showered and then went out to look for a spot for lunch.

Here’s an up close shot of the beach. It was swimming weather for us New Englanders, but the Italians wouldn’t dare to swim in 70-degree weather, which is why no one is out there!

The first of many gelato sightings! A cute little gelateria on wheels. 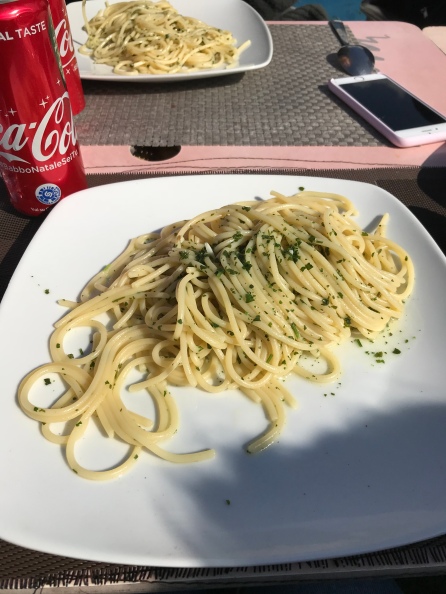 Our first Sicilian meal was eaten at a restaurant by the sea. We had caponata and spaghetti with parsley. I really liked it, and this meal was fun since we got to practice using our Italian for the first time! Oh, and I can’t forget to tell you about my Coca-cola experience:

I never drink soda at home. I hate carbonation and I always have preferred water. But for some reason on this trip, I got addicted to Coca-cola! At almost every meal I ordered a Coke. Even at the hotels, my friends and I would get some to take to our rooms. I don’t know why — maybe Italian Coke is better than American Coke — but it just felt so natural to me while I was there. I haven’t had it since I got back, so I think I’m going to make Coca-cola an “only-in-Italy” thing so I don’t ruin the joy 😉

My first real gelato! There was an adorable gelateria right down the road from our hotel called Dolce Cono (Sweet Cone). I ordered ~un cono con due gusti: pistacchio e cioccolato ~ (a cone with two flavors: pistachio and chocolate). It did not disappoint. I’m still dreaming of gelato.

After we returned, I hung out by the pool for a little while, watching the crazy group of kids who were staying in the same hotel do “tricks.”

My roommate and I accidentally discovered the solarium that was on the roof of the building, and this is one of the views from the top.

Another view: this is a really cool hotel (and mountain).

Maybe this is TMI, but I’m gonna share it for those who may be curious about European bathrooms/design! This is the shower in our hotel room. It was very cramped, but I got used to it after a while. Every hotel bathroom also had a bidet which I had never seen or used before! When we ran out of toilet paper, the owner of the hotel made jokes about how obsessed we Americans are with TP and how “the bidet is there for a reason!”

It’s so random, but I’m obsessed with the “continental breakfast” hotels offer. Something about not eating breakfast in your own home makes me excited, I guess. This hotel’s spread was very nice. Every morning I ate a peach yogurt, a croissant, and sometimes an orange. Yum. 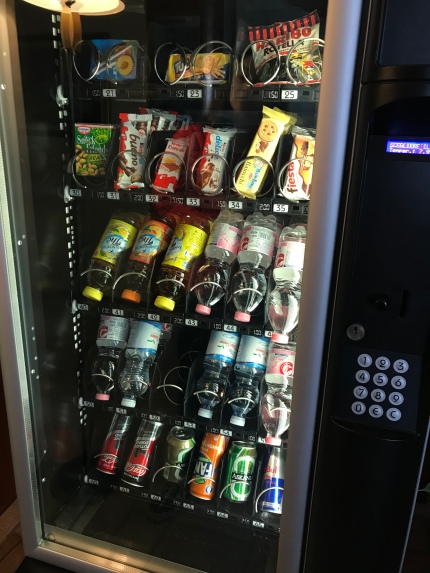 That was all of day one. It was quite uneventful, but I figured I’d share our one relaxing day before the craziness of the rest of the trip! I’m happy I’m writing this all down here because it’s letting me relive these memories through photos. I miss this trip so much!

Tomorrow I will post more photos and stories from our second/third day in downtown Palermo! Stay tuned…