HELLO! April has been crazy. It feels like it’s lasted a year but in a totally amazing and wonderful way! I got back from Sicily just two weeks ago, but before I share a bunch of posts related to that, I wanted to share something that, I think, is just as exciting.

I turned seventeen on April 7, and two days later, I went to a David Sedaris reading/book signing where I met him (!!!!!!!!). It’s been almost a month, but I’m still in total shock! Every time I think about that moment I get excited all over again.

I started reading his books only a year or so ago. The first one I read was Me Talk Pretty One Day, and since then, I’ve read almost his entire collection (I have yet to read Barrel Fever, Let’s Explore Diabetes With Owls, and Squirrel Meets Chipmunk). My favorite thus far is Calypso. While still very funny, Calypso brings out a side of Sedaris that’s much more raw and emotional. The whole book was just a pleasure to read, and I’m sure I’ll revisit it many more times.

Anyway, I was on a Sedaris kick for a few months last year, slowly making my way through his collection. My mom, who introduced me to him and loaned her books to me, got tickets for Christmas/my birthday to a book signing and reading in Providence.

Leading up to that night, I really didn’t think I’d meet him. The show was at 7 p.m. and would last about an hour and a half, so it’d be 9 p.m. by the time the book signing started. It was a school night, and I didn’t think I’d be motivated to stay even later and wait in a huge line. I had accepted the fact that I wouldn’t be able to get my book signed, but I still was thrilled to hear him read. But, for some reason, I was really lucky that night! Here’s the whole story…

Once we got into the theater, I bought my own copy of Calypso in the venue’s lobby. The woman selling it told me he was doing a pre-show signing upstairs. I felt like I was part of a VIP list; did anyone know about this?! It was the first I had heard of it, and I didn’t see many people walking upstairs.

I ran downstairs and immediately told my mom. She told me I should get in line, so I ran back up the stairs. Once I got to the top floor, I scanned the room, looking for something that would indicate a line. I walked through a small crowd of people, and there it was: a red rope leading to a table reserved for the one and only David Sedaris.

I walked over quickly to get behind the rope and was only behind six or seven people. Holding my new copy of Calypso and my previously-owned copy of Theft by Finding, I stood there, excited and very anxious. There was a man giving out sticky notes, asking people to write their names out so David would know how to spell them. It was that moment that it hit me: I was about to meet DAVID SEDARIS. What?!?!?!

I had never really met anyone famous before that day, so I had no idea how I’d act which made me 10x more nervous. I stood in line for about ten minutes until I was almost at the front. The woman ahead of me got three books signed, and in each of them, David wrote a small note about her supposed alcoholism (she was drinking a beer and had said something he didn’t understand). “Sober up!” and “Admit you have a problem” were the two I saw him write. I laughed as I watched from behind, anxious to find out what he’d write in my books.

When I got to the table, we exchanged hellos and he asked me how old I was. I said I was seventeen, and he asked me who I was with. I told him, “My mom, but she’s downstairs. She’s met you before.”

Apparently, the first time I said this, he didn’t quite hear me. Looking back, though, I think he heard me just fine 🙂 I repeated myself two or three times: “She’s met you before.” He finally responded with, “Ohhhh, I thought you said she’s my evil whore!” And that, my friends, is why he wrote this in my copy of Calypso: 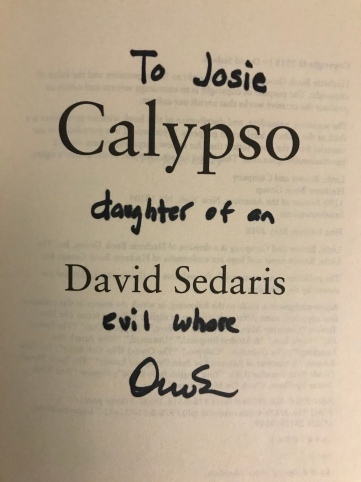 I can’t think of anything more memorable to be written in this lovely book for the rest of my life. Oh, and a disclaimer: My mom isn’t an evil whore 😉 but she thinks it’s hilarious.

He then took the second book I brought with me, Theft By Finding, and began to pick up a couple of Sharpies. While beginning to draw, he asked me if I had a job, and I told him I did. Then he asked where I worked, and I replied, “I work at a farm stand near my house.” He asked what kinds of things we sell, and I said, “Oh, you know… snacks, milk, ice cream…” We conversed about ice cream for a while (he said, “it’s my one weakness.”) as he drew a pretty blue flower:

He handed me my two books, and as I was about to say goodbye, he pulled out a bag from underneath the table. He said, “Now because you’re a teenager, you get a present.”

He placed a small box on the table which contained a little fox-shaped brooch. Then he took out an Obama-in-Hawaii bottle opener he had gotten in Honolulu. He let me choose which of the two I wanted, and I, naturally, took the bottle opener (lol). I thought it was the weirder and more memorable gift, although anything from David Sedaris — even just a signed book — would have been unforgettable. I took the bottle opener, and he, knowing I was seventeen, told me, “Don’t forget, now: you have to wait to use it ’til next year!”

I’m still not sure how I was even formulating sentences at this point. David Sedaris and I just had a five-minute conversation AND he gave me a gift? What just happened!? I was so happy, and as I left, I told him how great it was to meet him. I thanked him for the books and for the present, and he responded with a sincere, “you’re welcome!” and smiled at me as I took my books and walked away.

That night was, by far, one of the best nights ever. (The reading itself was, of course, hysterical and so much fun, too!) David is such a genuine, kind-hearted, and hilarious person who truly loves meeting his readers. I’ll never forget it!

I doubt he’ll ever read this, but thank you so much, David! I will treasure my books and Obama forever. ❤