This past Sunday, I went into the city again with two of my friends from school, Megan and Brooke. Meg had never been before, and Brooke had only been a few times, so I was so excited to take them and go to some of my favorite places for the day.

We left town at around 7:20 a.m. and drove to New Haven Union Station to catch a train to Grand Central. It was super empty for about three stops, but it quickly filled up and was the busiest I had ever seen it.

After about two hours, we made it to Grand Central at 11a.m. Surprisingly, it wasn’t insanely crowded, but the line to the women’s room was still incredibly long, as always.

We left the station and headed for the subway. We took the 6 train to Astor Place Station and walked to Washington Square Park. Of course, I had to take them to my favorite spot in all of the city!

It was chilly, but the weather was absolutely perfect. I’ve been having such good luck over the last few weeks with good weather days. I probably just jinxed it, but oh, well.

After walking around the park for a bit, we headed down Macdougal Street and then went to Joe’s Pizza. It’s not the cheapest slice in New York ($3), but it’s my favorite. Meg enjoyed her first slice of New York City pizza and said that it was “good” as I interrogated her while she ate it.

Next to Joe’s is Popbar which, again, is another semi-pricey stop, but their gelato-on-a-stick is delicious and totally worth it. I got the same thing I always get: pistachio with a chocolate dip, topped with pistachios and chocolate sprinkles.

After that, we walked down Bleeker Street a bit and visited the flea market that was happening. We stumbled upon a store called Soapology which I had never seen before. They gave us a free hand washing with lots of fancy scrubs and moisturizers, so our hands smelled delicious until we took the subway again.

The two employees were super nice and very good at convincing people to buy things, haha. I bought a verbena and ginger soap/shampoo bar and a lavender massage candle which is the coolest thing ever. It’s made with soy instead of wax, so you stick your finger in the melted part and it acts as a moisturizer! Such a cool idea. I will definitely be back here.

We stopped in a couple of other stores while walking down Bleeker Street. I was full from the pizza and gelato but had originally wanted to go to Magnolia Bakery for some banana pudding. I passed, but Brooke got some hot chocolate there and we enjoyed staring at the pretty cakes in the window.

I have been following Myers of Keswick on Instagram for literally forever and had been dying to go, mostly to buy Cadbury Flake & Crunchie bars.

After that store, we began walking to Strand Bookstore, a spot I figured everyone would enjoy. I also wanted to look for some gifts, and that place is the perfect spot for gift-shopping.

En route to the bookstore, we walked by a man selling some prints of the city he had painted. He was painting one as we walked by, and they were just incredible. I may have splurged a bit on one, but he was so sweet and I love collecting art. Here’s his website.

While walking up 11th Street, we came across the Eugene Lang building of The New School! I was just here for a tour a few months ago, but now that I’ve been accepted to the school, it was so cool to see again. Here’s me posing in front of it.

I showed Meg and Brooke the Parsons building on 5th Ave. They both fell in love with the city and want to apply to TNS now, too 🙂 I guess I did a good job showing them around!

Before heading to Strand, I spotted a Goodwill across the street and we checked it out. City thrift stores are so much better than the ones near me. I found four items of clothing for $36 in total. One was a J.Crew sweater and another was an Everlane sweatshirt! I was so excited to find them, plus I found the perfect pair of jeans that were UNIQLO brand. I know where I’ll be doing all my clothes shopping if I end up in the city next year.

I didn’t take any pics, but we went to Strand for a little while after Goodwill. I bought this book and a couple of other knick-knacks.

After Strand, we walked towards Union Square and found out that they were having a winter art market. It was crazy busy, but there were a ton of cool vendors, so we walked around for a few and checked it out.

We continued to walk uptown, and while doing so, we came across ABC Carpet & Home which is another store I had been following for ages on Instagram. Absolutely nothing in there is within my price range, but I have expensive taste and was in love with the elegant couches and lighting. It was such a fun place to wander around and window shop. I will definitely be back!

After that, we continued to walk as we were headed towards Eataly. We passed by another one of my Instagram stores, Fishs Eddy, but everyone was hungry and didn’t want to look at dishes for some reason…?? Haha. Someday I’ll visit there on my own and spend hours basking in the glory of their dishes.

We got to Madison Square Park right across from Eataly and could see the Empire State Building all lit up.

After eating, we went to Eataly to do some shopping. Voglio essere in Italia adesso! Also, so. much. panettone.

We hung out there for a while and then headed to the subway. I made the mistake of going in the downtown station rather than the uptown station, so $11 was wasted. But that’s alright. Surely it won’t be the last time that happens!

Once we made it onto the right subway, we were treated to a minute-long piece of entertainment. A man came onto the subway with a boombox and began to dance, telling a few people to move because he needed the space. He had a hat and was flipping it on and off of his head and doing flips on the poles. Meanwhile, a small white dog was barking up a storm at him, but it didn’t even phase him, and he kept dancing. At the very next stop, he got off and said, “Well, I gotta get off now. I’m too good for you guys, anyways!” in a lovely New York accent.

After that fantastic experience, we got off and began walking towards Rockefeller Center. I wanted to show Meg and Brooke a little bit of the touristy parts of the city, along with the less-crowded-and-much-cooler downtown area of the West Village. It was the Sunday before Christmas, so this wasn’t the best idea, but they both seemed to have fun regardless.

It took us nearly ten minutes to get through the crowds and walk up to the tree. It was pretty, but definitely not worth the pushing and shoving.

We walked past Saks Fifth Avenue which was the worst decision ever. The lights were pretty for, like, five seconds, but as we attempted to walk back to Grand Central, everyone just stopped and we got stuck in the crowd for nearly ten minutes. People yelled and pushed and complained, strollers ran over my foot, and it was not. fun. But it was certainly an experience!

I’m so happy we spent time downtown for the majority of the day. Lots of people just go to New York for the big sights in midtown but never see the magic that surrounds it. And there were absolutely no crowds where we were earlier in the day! It amazes me how crazy it got as we continued to go uptown.

We walked back to Grand Central after that, tired and ready to catch the train. On the walk back, we had the perfect view of my favorite building in all of New York: the Chrysler Building. I took way too many photos; none are great, but here are two of them. 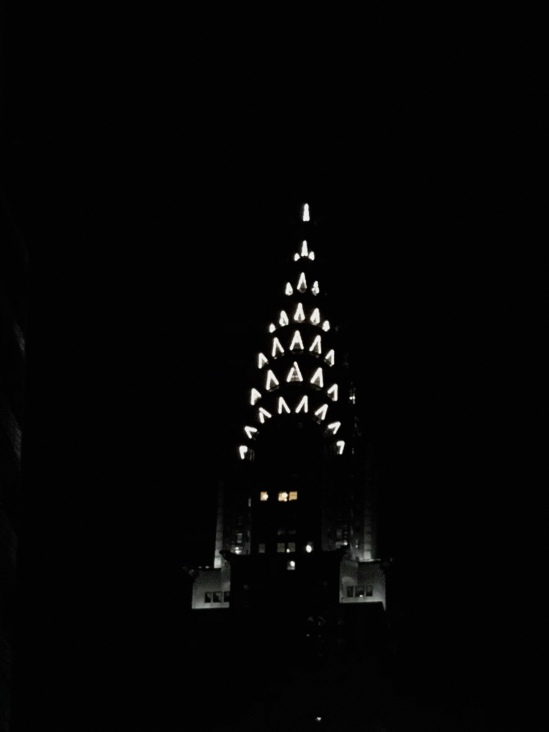 I gotta say, I’m proud of myself for planning this day trip on my own. I came up with a whole itinerary and we stuck to it completely! Both Meg and Brooke loved the city, and I’m so glad! Now I know I’ll have friends to come to visit me if I end up here for college next year. 😉

Next time I’m in the city, I’m giving myself a challenge to only spend $10 throughout the day because I, er, went a little crazy on this trip. But to be fair, I rarely buy things for myself, so I’m going to treat my spending as a Christmas/congratulations-on-getting-into-five-colleges present to myself!

Minus train/bus tickets to get in and out of the city, I’m excited to see if I can survive on $10. I totally think it can be done. I’ll have dollar pizza or cheap bagels for every meal, avoid the subway and walk everywhere, and I’ll stick to window shopping. It’ll be easy! I’ll definitely do a blog post and let you know how it goes.

Anyway. This is the last of my New York posts for the year. Like I said last time, I always feel so inspired upon leaving the city, so I will definitely be writing more about it in the new year. I’m on break for the next two weeks, so I’m going to try and finish my extremely long “favorite things of 2019” post before the year is over…stay tuned.